NYC EATS: WHAT I DISCOVERED ON MY LAST TRIP TO NEW YORK

During my first trip to NYC, I binged on pizza and hotdogs. That just made the most since to me at the time. After I got that desire out of my system, I made the better choice to search out some foodie-fun during my last trips.

The shop happened to be in the same building as the casting we had just left. We walked outside and I noticed the hanging sign. Makenzie and I stopped in at ‘Wichcraft–I thought the name was amazing..that’s why I chose to drop in. I figured, we had about 45 mins until the Kid Car driver arrived and this would be far more satisfying than airport food.

Totally correct on that last thought: the food was so good. I don’t even remember the name of this version of their grilled-cheese, pressed sandwich but just look at it. It was delicious. 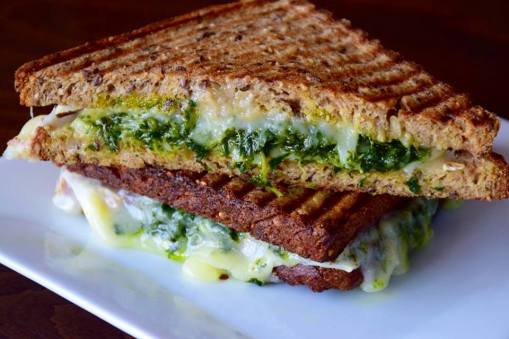 Their bakery selection wasn’t bad either. A lot of gluten-free, vegan options. There was a variety of muffins like the one below. Croissants, scones, cinnamon rolls and other deliciousness.

We really just sat around, enjoying the atmosphere and our lunch. It’s nice to just disconnect for a moment and live in the present. I find it easier to do when I’m spending time with one of my children at a time. There isn’t the constant need to make sure portions are just the same to avoid melt downs, that one child isn’t pouring drink into his/her lap while I’m wiping the hands of the other. You get the idea. It’s refreshing to just enjoy food as it is and in that calm moment. I always get that feeling when I’m eating with one child. Parents with multiple children understand this–the jump from one child to two is ground breaking.

We also visited Pat Lafrieda Meat Purveyors during our visit. It was located in a food court (of sorts) that was connected to Maddison Square Garden. Since we were staying directly across the street, it made sense to walk on over and see what the food court had to offer. La Frieda was the first option in a line of restaurants. We made our rounds and decided to circle back around to La Frieda.

The set up was super cute–like a farm. Ironic, since we were in the “concrete jungle” but maybe, as a Texas girl, the farm vibe was what drew me to La Frieda. Either way…they had some delicious options for lemonade, grilled cheese (clearly, that is my go-to while traveling. Go figure.), burgers (what they are best known for), yuca sticks, and other eats. Small menu, for sure, but it packed a punch. Everything we ordered was delicious and their were other items on the menu that were calling my name.

I hope everyone had a good weekend! Things are starting to pick up at work–as it does around this time. I am definitely seeing my schedule getting tighter around the edges which means less time for my weekend adventures. I’m soaking in all the time I can at this point.

GET POSTS VIA EMAIL